The history of Petromidia began over 40 years ago.

It is said that the location of the Navodari factory was decided only after a helicopter flight over the lands. Then, the officials of the time decided that Petromidia's current position was perfect, because it met all the necessary conditions: it was near the sea, it was near a locality that could be developed and it was near a vast space on which it could stretch.

It is no surprise that Navodari, at first only a small settlement, made up especially of fishermen and animal breeders, had a fulminating growth in time. At the beginning of the 20th century, it had 500 inhabitants, then, in 1975, the population increased to 7,000 inhabitants.

The demographic growth took place in the 1980s, when 26,000 people were already living in Năvodari; today, we are talking about one of the most important cities in Dobrogea, with 40,000 inhabitants.

In the mid-1970s, the area was virtually a marsh. Few know that, out of the total area of 480 hectares Petromidia occupies, 37 hectares have been recovered from the sea. The first brick was laid on July 9, 1976.

They worked hard to ensure the stability of the land under Petromidia, so that the entire construction can now resist a nine-degree earthquake on the Richter scale. The works on the refinery have taken 13 years and around 5,000-6,000 people were involved in erecting this establishment.

The Moment of Truth

1979 is the year we all cherish. That year in June, the first refinery plant was put into use: Atmospheric Distillation. Today, Petromidia counts no fewer than 19 main plants that, together, make up the largest refinery in Romania.

The veterans of the platform always remember, with excitement, the first few days, the first tests and the first notable results. They are also those who witnessed the fulminating evolution of the refinery, from one single plant to one of the most important refineries in the Black Sea region.

The intent of that time was to develop a whole vertical industry: textiles, petrochemicals, rubber, lakes and paints, chemical fertilizers, and all of this development would be based on petroleum.

Between 1990 and 2000, the markets have radically restructured both internally and externally, and the raw material requirements for the synthetic yarn and fibre industry have fallen sharply, which has led to redirecting the platform's activity on the production of fuels and polymers.

Starting with 2005, the refinery was the first in Romania to have a command and control centre where processes were automated. The building is built as a bunker, being designed to withstand harsh natural disasters, such as earthquakes.

Between 2008 and 2012, the largest capacity upgrade project took place, from 3.5 to 5 million tons. Thus Petromidia became the largest refinery in Romania and one of the most modern in the Southeastern Europe, with a significant impact in the Dobrogea area and at the national level.

The refinery works with Vega, the Group's second refinery, to which it sends semi-finished products resulting in value-added products. Vega is the only local producer of road bitumen, polymer-modified bitumen.

Also, within the Petromidia refinery there can be found the only petrochemical unit in Romania.

In 2008, the refinery launched the only marine terminal located 8.6 miles from the Midia Port, which supplies the refinery with crude oil by means of subterranean and terrestrial pipelines.

Currently, there are 45 people with a seniority between 39 and 40 years on the platform.

Chronology of the Petromidia Refinery

The first step
was taken 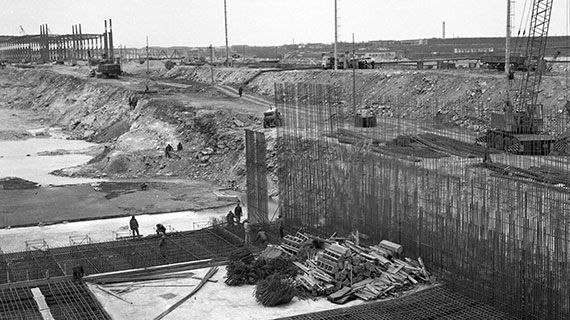 In order to cover the entire area required to build the platform, 33 hectares were recovered from the sea. Sandy soil was a hard challenge for the engineers, but with the combined eforts of hundreds, the field was ready for what had to become one of the most important industrial points in Romania. 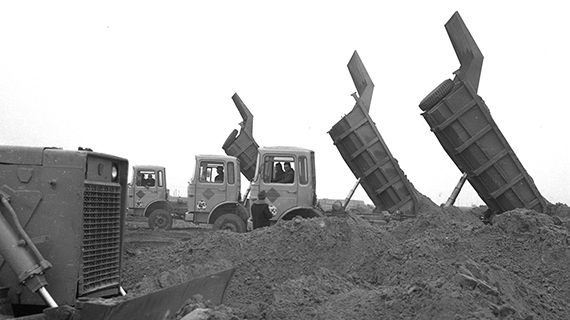 The year that
changed everything

In June 1979, the first installation from the plant was succesfully started: the „Air Distilation”, together with all the technological flow facilities: the crude oil tank, the gas tank and the diesel oil tank. Already in the first year there was a production of 1,25 milion tons of oil products and most of them were sold on the internal market. 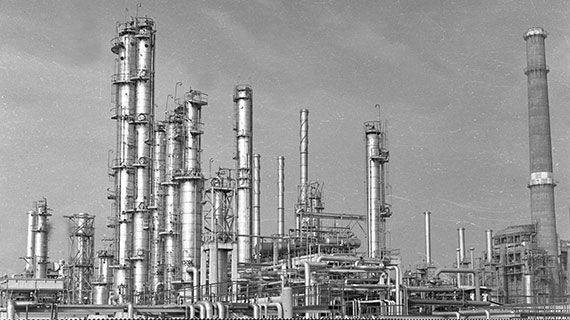 The refinery develops more
and more each year

In 1982 were started the Hydrofining Gas System, Catalytic Gas Reforming Systems and the Gas Fractionation systems. We can already speak about a big unit. 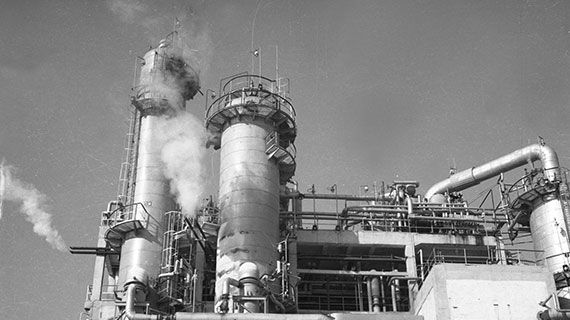 A year away, aromatic extraction and
separation facilities were also started 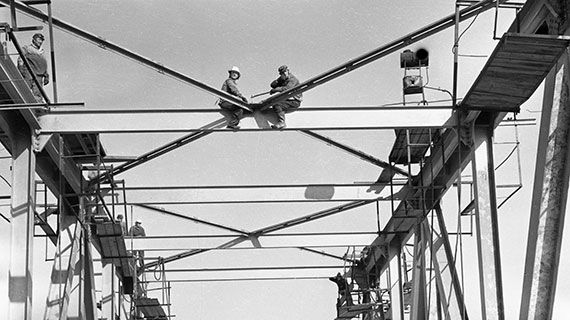 One of the refinery's major facilities, which over time has seen several modernization works. Today, the catalytic cracking unit at Petromidia is considered one of the best in Europe. 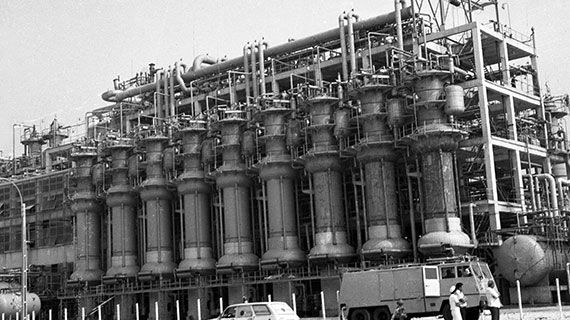 The cooker unit was
put into operation

The xylene isomerization and paraxylene ethyl benzene and orthoxylins separation systems are put into operation. In the same year, the carbon-production plant was commisioned, and in the petrochemical sector started the DMT plant. 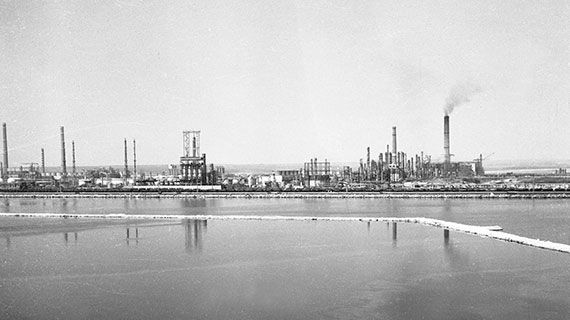 The beginnings of the
Petrochemicals Division 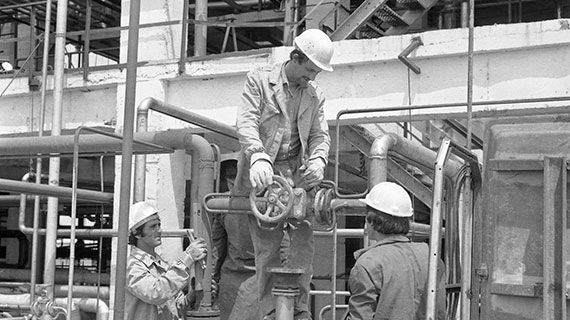 From an operational point of view, the Petromidia refinery exceeded for the second consecutive year the 3.6 million tons of processed raw materials step. It is the capacity that has been designed since the 1970s and integrates Petromidia into a refining network meant to process together over 30 million tons each year. 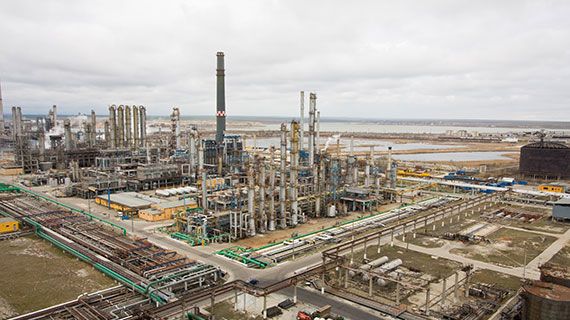 Petrochemical Midia was transformed
into the Petromidia trading company 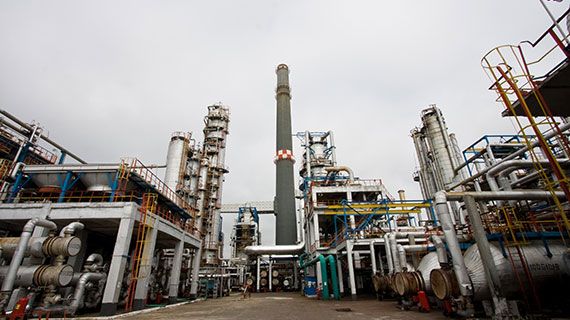 The facilities
were upgraded

However, the management of SC Petromidia had the courage to access a repayable loan amounting to 50 million USD, with the help of which, during 1992-1994, the facilities were upgraded. The credit can be considered a true saviour.

After an unsuccessful privatization, the Navodari refinery was caught in an uncertain situation. Decreasing operating results (873,000 tons of crude oil), when the level dropped for the first time in history below the one million tons of crude oil, weighed in a less favorable image of the refinery. 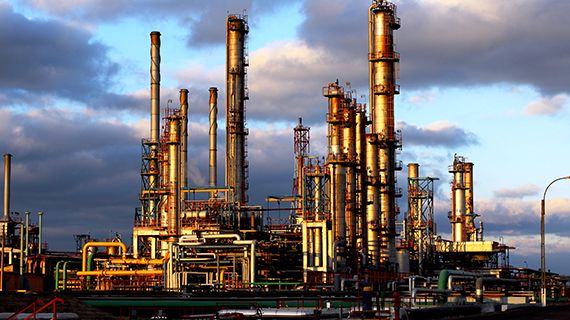 On 20 October 2000, the refinery's turning point came as well. Rompetrol bought the state's shares, and Petromidia was going to enter a new era. The operational result returned to more than one million tons of crude oil processed, and a new look of the largest refinery in the country soon emerged. 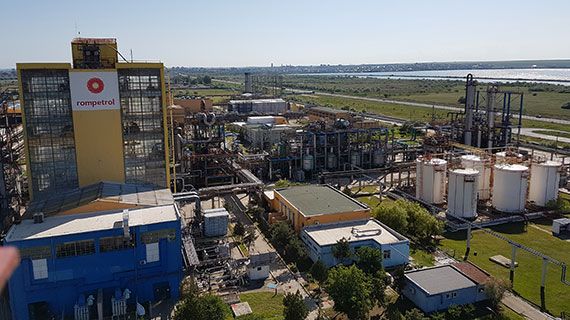 An ample process of accelerated restructuring and upgrading begins. The first step was the automation program by implementing Distributed Control Systems (DCS). Rompetrol Rafinare becomes the most modern refinery in Romania. The volume of processed raw materials doubles (2.3 million tons). 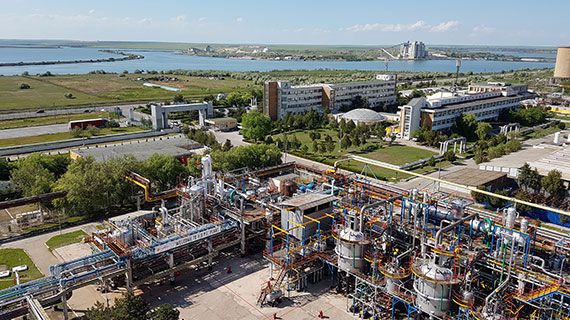 Refinery of the Year in Central
and Eastern Europe

Rompetrol Rafinare receives the title of "Refinery of the Year in Central and Eastern Europe" from the World Refining Association as a recognition of the success of the restructuring and modernization process. There is also a new installation that appeared: the In-Line Blending. 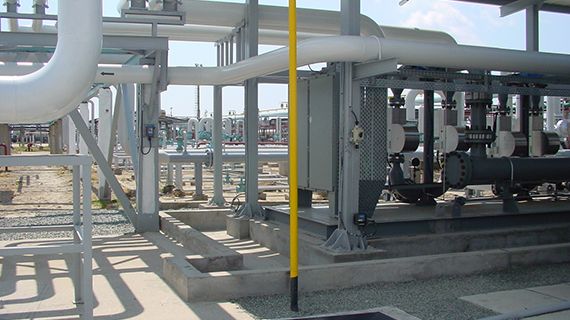 Command and Control Center of
the refinery is inaugurated

Rompetrol Rafinare was listed on the Bucharest Stock Exchange. The company is included, in the interest of investors and the positive evolution of the shares, in the selected BET index. Traded under the RRC name, it is one of the most liquid listed companies.

In the same year Petromidia’s Refinery Control and Control Center was put in place, being the only one of its kind at that time in Romania and Southeast Europe. 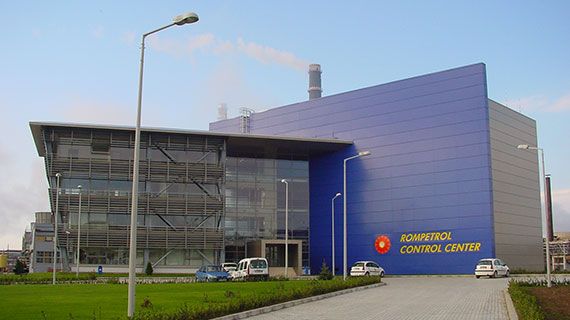 The refinery successfully completes a new series of investments worth 30 million USD. Until 2009, the extensive modernization process amounted to approximately 200 million USD, resulting in a 30% increase in crude oil processing capacity. 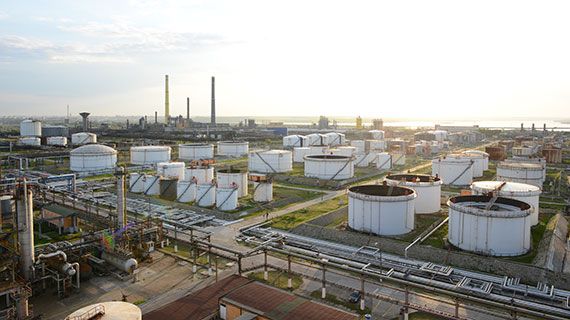 Rompetrol Rafinare signs with DuPont a labor safety consultancy contract, a measure that strengthens the company's policy of achieving a very high level of security in its operations. At the same time, Petromidia becomes the first refinery in Romania to obtain Euro5 diesel (<10ppm), three years before the legal deadline for complying with European standards. 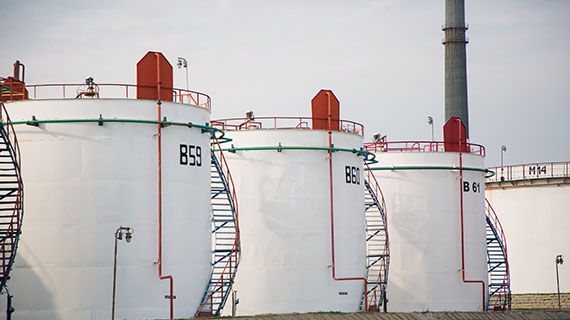 Rompetrol is taken
over by KazMunayGas

2007 is the year when 75% of the Rompetrol shares were taken over by KazMunayGas, the national oil and gas company in Kazakhstan. In the same year, Rompetrol Rafinare receives from Germanischer Lloyd - one of the most important bodies in the field - the certification of the Integrated Management System from the point of view of Health and Safety at Work. 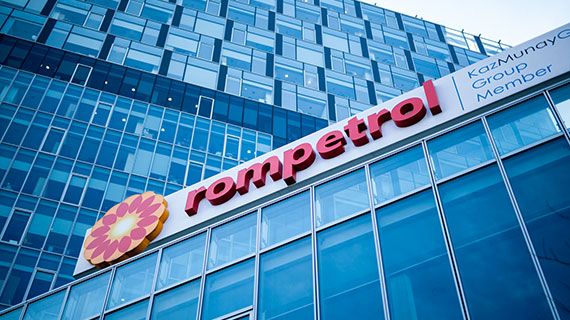 The refining capacity upgrade program starts, in order to reach 5 million tons/year. The installations are also upgraded, one at a time, and Rompetrol Rafinare starts Euro5 gas production, after total investments in the fuel range of more than 40 million USD. The impact of the new investor is also favorable in the operational results: in 2008, the Petromidia refinery surpassed for the first time in history the 4 million tons of processed oil milestone (4.4 million tons). 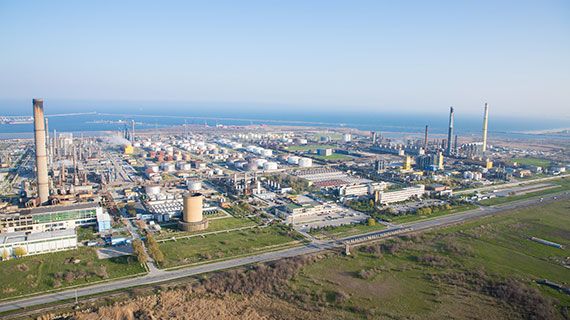 The majority shareholder acquires the remaining 25% of the shares. Thus, KazMunayGas, through KMG International, becomes the sole shareholder of Rompetrol, which includes, among other entities, two refineries (Petromidia Năvodari and Vega Ploieşti), Rompetrol Downstream and Rominserv. 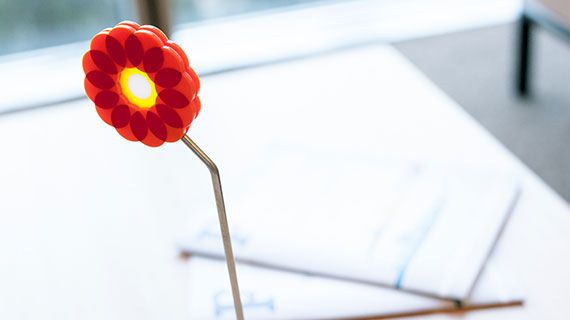 Strategic partnership
with the Romanian state

The Romanian State became a significant shareholder of Rompetrol Rafinare (with 44,69%). Also an extensive investment program begins to increase the HDPE capacity by 70%.
It has also been possible to optimize costs and diversify the products from the Petrochemicals Division. Practically, we witnessed the successful integration of Petrochemical plants into the Petromidia Refinery Control and Control Center. 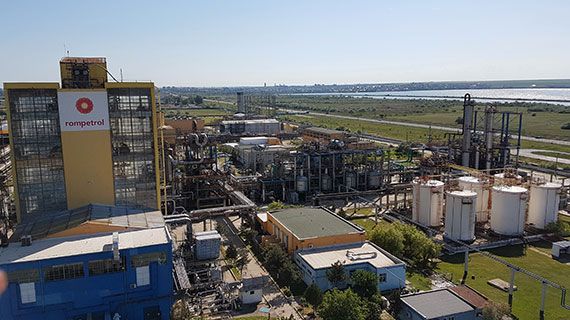 The refinery’s capacity building
program has been completed

The programme to increase processing capacity from 3.5 million tons to 5 million tons / year has been completed. The total investment amounted 380 million USD. The works were coordinated by Rominserv, and the whole process involved a stagering number of 280 companies and a total of 3,500 people. 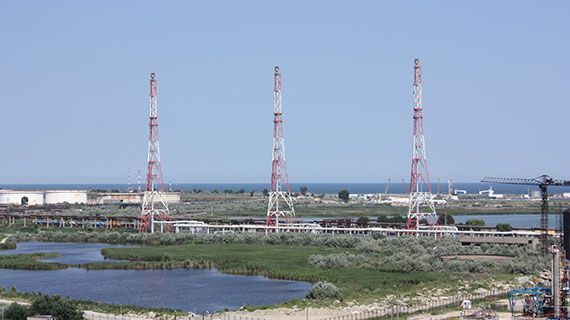 KMGI presented a new successful investment of the refinery: upgrading the coking plant. Work done at over $ 50 million cost has led to an unity of the unit (90% reduction in technology consumption, an annual loss of about $ 3 million, and a reduction in energy consumption). 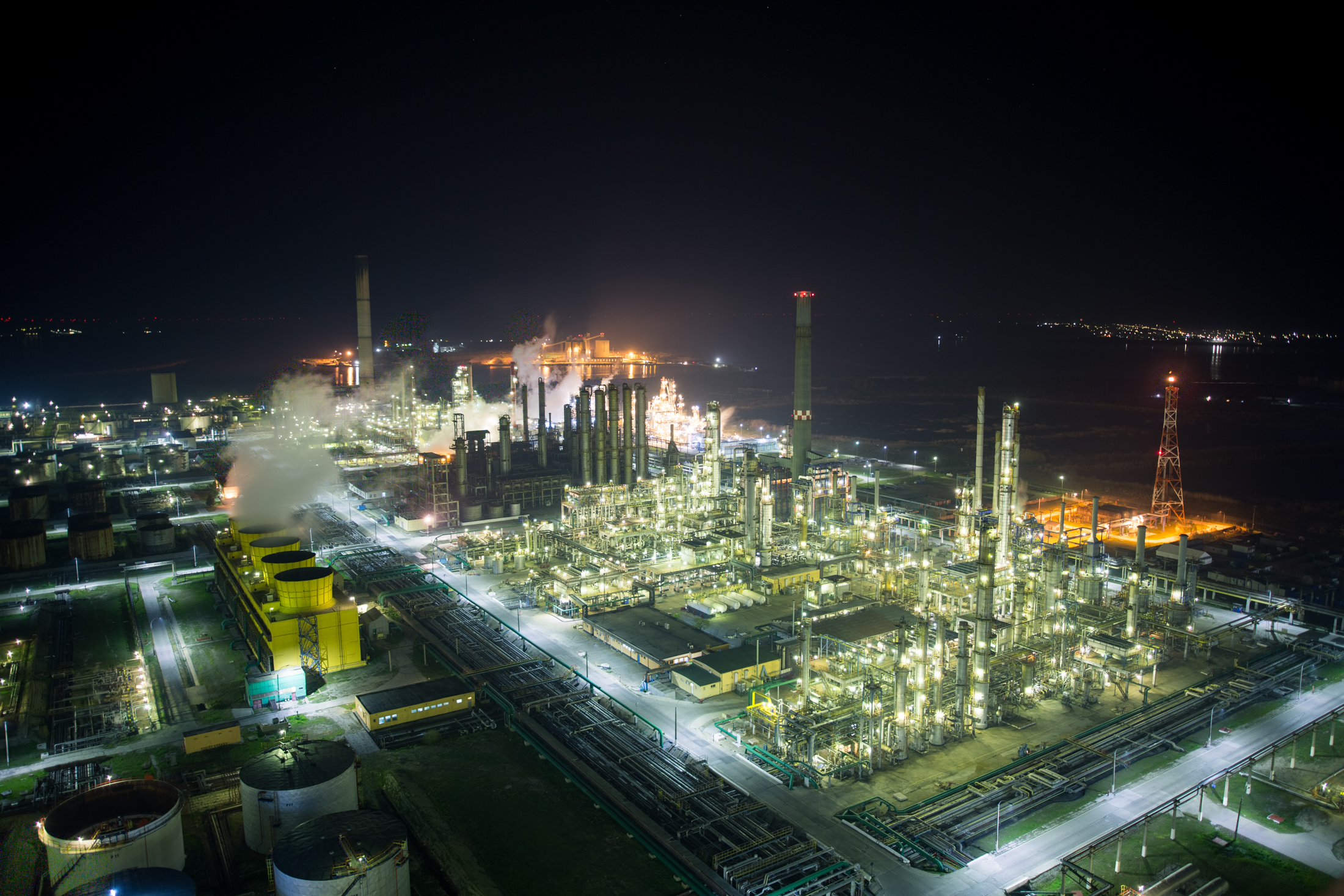 The Petromidia refinery achieves a new record: it successfully passes the 5 million tons of processed raw materials milestone, a level achieved for the first time in history by a refinery in Romania. The exceptional result is directly linked to the investment package allocated by KMGI to increase production capacity. In the same year, new sorts of PP and LDPE are being developed at the Petrochemical Division. 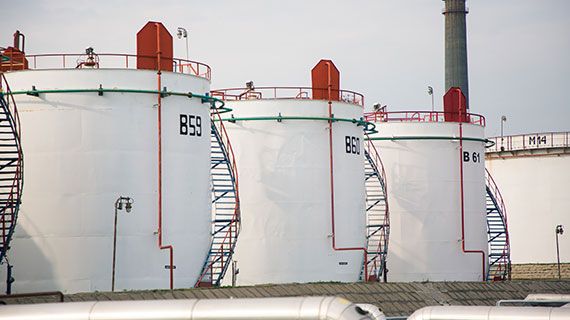 Rompetrol Rafinare continues its upward trend, amid constant investment from KMG International. There were recorded: the highest quantity of raw materials processed daily (over 15,000 tons), the highest yield for white products (85.7%) and the best Energetic Efficiency Index (98.6%). 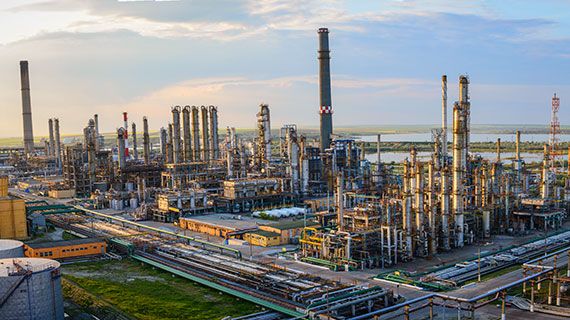 2016 is the best year in history to that point. The record gasoline production (1.25 million tons) and diesel (2.25 million tons) were achieved at the lowest costs for the last 10 years, proof of the efficiency of the Petromidia 2010 investment package. The operational profit of Rompetrol Rafinare amounted to 182 million dollars. 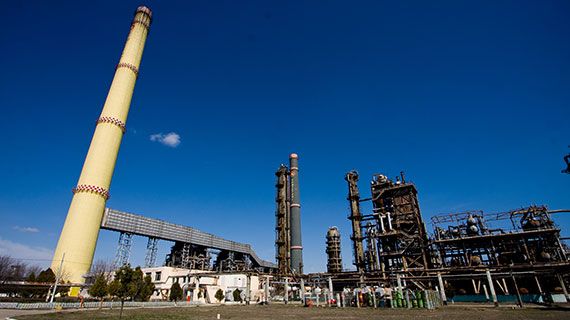 Rompetrol celebrates its 15th anniversary since it has begun its presence as a brand on foreign markets, such as Bulgaria or the Republic of Moldova. In 2017, the fuel stations network in the subsidiary countries counted 134 units, and the investments made by KMGI outside Romania were over 50 million USD. Stations in countries like Bulgaria, the Republic of Moldova or Georgia work, overwhelmingly, with fuel produced at the Petromidia refinery. 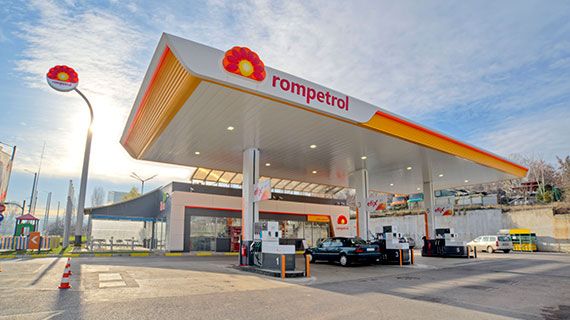 Petromidia achieves 11 new operational records and manages to get close to 6 million tons of processed raw materials (5.92 million tons). Exceptional operational results, amid a more efficient activity, give hope for new records in the year Petromidia celebrated 4 decades. The economic impact of Rompetrol Rafinare in 2018 it contributed to Romania’s State Budget with more than 1.5 bilion dollars. 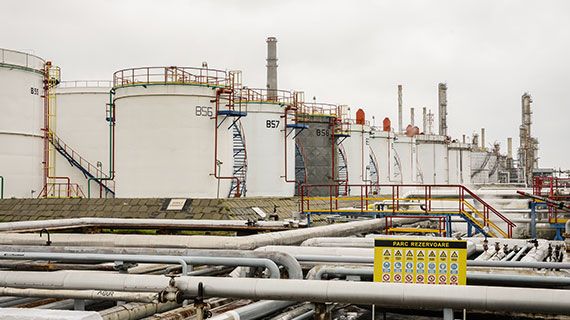 Petromidia refinery celebrates 40 years of existence. In the four decades we saw a refinery starting from a plant and reaching 19 functional and performant units. At the same time, during the 40 years, the refinery experienced tumultuous, but successful times, especially during the 12 years that have passed since the takeover of KazMunayGas. 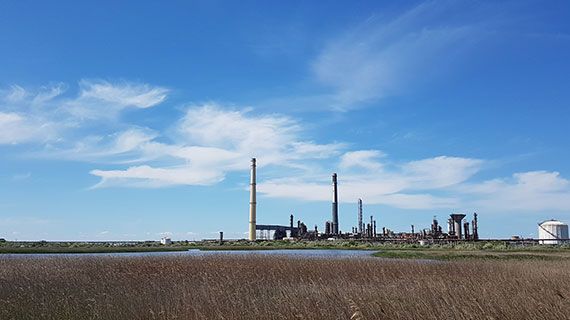