Rompetrol Rafinare is the largest asset held by the KMG International Group in Romania. The company operates the two refineries of the Group - Petromidia of Navodari, county of Constanta, together with the only petrochemical division of the country, and Vega Refinery of Ploiesti, which keeps the local refining industry at high standards.

The strategy employed by the Group included investments of more than USD 1.4 billion in development of the refining and petrochemical business lines, as well of the infrastructure supporting crude oil sourcing and delivery of finished products across Romania and the Black Sea region.

These retrofitting programmes were undertaken and carried out starting with 2008, in a local and international context marked by the financial crisis, with the oil and gas industry being among the most affected. 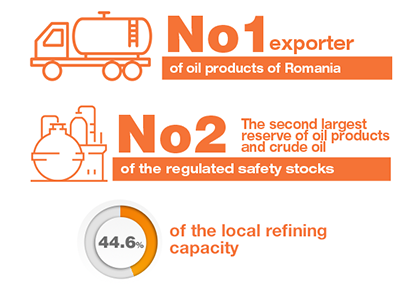 Rompetrol Rafinare continues to represent a factor of stability in the industry, at the local and regional level. The January - September 2022 period was a complex one, with challenges in the supply of raw material, with a successfully completed and in the proposed schedule turnaround, and with a complicated context in the Black Sea area. However, we have aligned our production and sales in order to support the increased demand in the country and we have focused on streamlining operational flows and maximizing performance, in safe conditions and environmental protection.

Rompetrol Rafinare, a member company of the KMG International Group, managed to improve its financial indicators in 2021, amid a sales volume similar to the previous year, but also as a result of higher market quotations compared to similar periods from 2020.

However, the company's consolidated results were impacted by the shutdown of operational processes, caused by the technical incident that occurred on July 2, in the Diesel Hydrotreating Unit (HPM), an event that also affected other facilities in the Petromidia refinery.

In order to restart production activities, for over 80 days, extensive remediation works were carried out on the affected assets. The teams of Rompetrol Rafinare specialists, together with those from Rominserv and with the support of several companies with expertise, managed, in the 3rd quarter of 2021, to lead to the restart of the operational processes, and in the second half of October 2021, the facilities reached optimum operational efficiencies.

Rompetrol Rafinare continued to be a major contributor to Romania's state budget 1.63 billion dollars in 2021.

Read more about the financial and operational results in 2021.

The largest local refinery, and of the most modern in SE Europe.

The sole producer of polymers in Romania.

We make a contribution to the Romanian industry and energy security.

Meet the executive management of the company

WE PROTECT
TO CREATE

Rompetrol Rafinare assumes in full its important role in protecting and keeping safe the environment. We bring our constant contribution to mitigation of the environmental impact and of any effects of our operations.

Having reviewed the progresses we achieved in reduction of waste and energy consumption, and in compliance with all environmental regulations, we commit to protect the communities around our operations in the long run. As to employees, our objective is 100% SAFETY, through training programmes, thorough checks and extension of our protocols also to contractors.

Rompetrol Refineries are aligned to the BAT (Best Available Technologies) standards, and Petromidia is the first Romanian refinery to have successfully aligned to European environmental regulations and fuel quality standards.